If you love you some of those dreamy Synthwave chords that transport you to a different time or world, then you're in the right place!

Here's how you can easily make dreamy Synthwave chord progressions...

A very typical chord progression for Synthwave music is the I-VI-IV-V (or a 1-6-4-5). You can enhance the "dreaminess" of your Synthwave chords by using suspended chords and/or chord inversions as well.

With that said, let's dive in to how you can actually make Synthwave chord progressions in your next project.

Table of Contents
1
How To Create Chords When You Don't Know Music Theory
2
Pick A Key
3
What Key Is Synthwave Music In? (50 Songs Examined)
4
Common Synthwave Chord Progressions
5
Use Suspended Chords
6
Use Inversions
7
Other Ideas
8
Conclusion
9
Finish More Songs, Faster

How To Create Chords When You Don't Know Music Theory

Now, if you looked that the numbers above and got confused because you thought you were writing music and not doing math, don't worry. You're not alone.

After all, "people who use math after college deserve to go to prison."

I actually know very little music theory myself, and can't read music either. But you don't need to be able to do either of those two things to be able create great music.

When you start a new project, go ahead and create a track with all the chords in the key you're working in.

If you're in a Major Key, a trick is to count up 4 notes, and then another 3 notes to create your chord.

If you're in a Minor key, you flip those numbers, and count up 3 and then 4.

This trick will work for any scale, and comes in handy when you don't know all the notes in a particular scale. Now, in actual music terms, you actually only count the notes IN THE SCALE when numbering notes, so in technical terms, the notes for a standard triad would be 1-3-5. Now, to figure out all of the notes in a key (and therefore what all the chords are), you can simply google it or use a free tool like Autochords.com.

Or you can pull up your Pitch Corrector tool in your DAW, and choose the key there, and then it will show all the notes in that key: 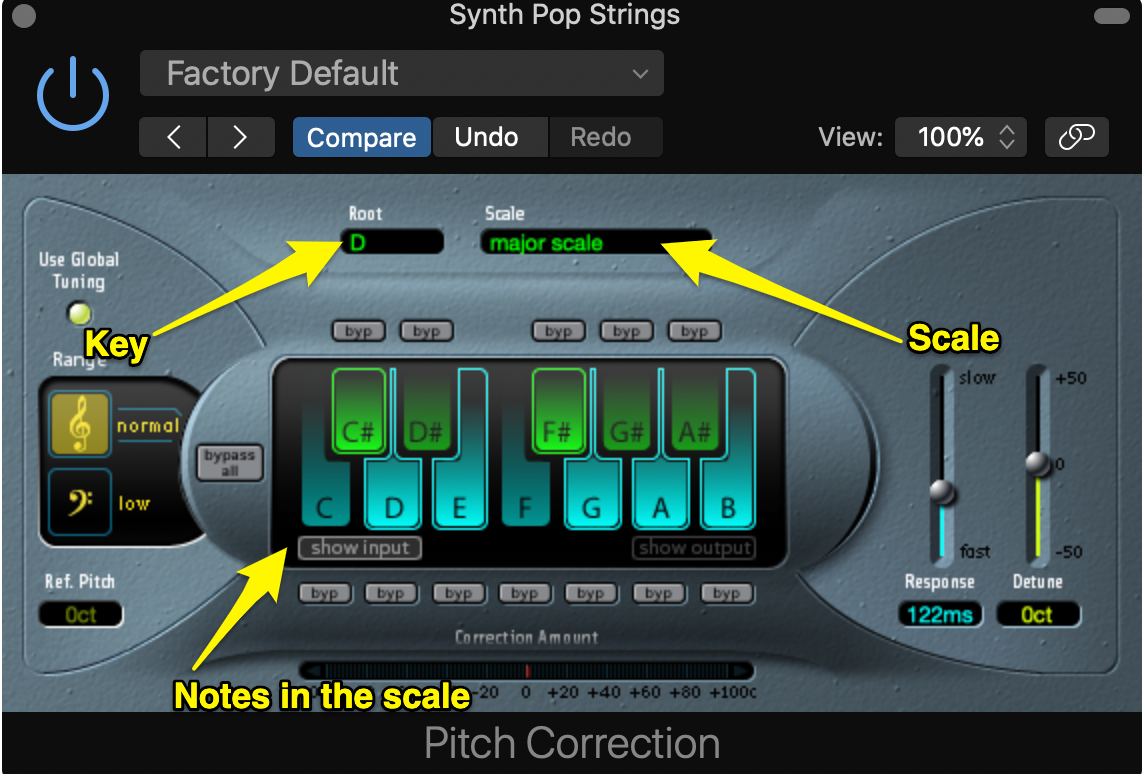 You can pick any key for your synthwave song.

But if you want to see what some of the most popular keys of synthwave songs...

Then check out my article here.

What Key Is Synthwave Music In? (50 Songs Examined)

The Root note progression for "Comeback Kid" by "The Midnight"

You can use any chord progression in your next Synthwave track, but here are some patterns that typically pop up.

Use Simple Verses and Choruses

It's not uncommon to find very simple chord progressions in the verses of Synthwave songs. They can even be as simple as only 2-3 chords.

There are lots of I - IV verses, followed by some combination of V, IV and vi for a chorus.

Here are some examples:

Then when you get to the chorus, you can return to the 4-chord progression of your typical pop song, but you can tweak them a bit to get that dreamy synthwave sound, which we'll cover below...

For the sake of this tutorial, I'm just going to use a standard 4-chord progression in the key of D major. For my pattern, I'm following a rather standard 1-5-6-4 progression, using standard triad (3-note) chords.

In other words, D major, A Major, B Minor, G Major. To get that dreamy chord sound, try using suspended chords.

A suspended chord is...

A suspended chord (or sus chord) is a musical chord in which the (major or minor) third is omitted or replaced, usually with either a perfect fourth or a major second,  although the fourth is far more common.

In other words, try moving the middle note in the chord up or down. Just move it around until it sounds good.

I did that for our example, and now it looks and sounds like this. Clip taken from "Demon Voice" by one of the greatest YouTube channels of all time, BalloonShop.

Another common theme of synthwave chords is they tend not to move around very much. You'll find that a lot of the chords in a synthwave chord progression share the same notes.

You can achieve this by using inversions.

Inversion, in music, rearrangement of the top-to-bottom elements in an interval, a chord, a melody, or a group of contrapuntal lines of music.

Or, in our case, and inversion is just moving the top or bottom note of a chord up or down an octave in order to reduce the amount have space between notes that we're using in our chord progression. I ended up only inverting one note. You may want to invert more, or none at all. As always, use your ears and do what sounds best to you!

Of course, not all synthwave songs should sound the same. In fact, if I were to make one critique of the genre, I would that there is a little too much repetitiveness.

With that in mind, here a couple other ideas for mixing up your synthwave chords.

This is very common as well. Just slap an arpeggiator on your chord progress, and see how that sounds. You can also use a pedal tone.

In music, a pedal point is a sustained tone, typically in the bass, during which at least one foreign (i.e. dissonant) harmony is sounded in the other parts.

In our case, this means keeping one note running all the way through the entire chord progression.

I'd say this is better for verses though, as the sustained note adds tension to your production, which is great for verses. But in the chorus, you want to release that tension.

Looking at the chords in our example, you can see that there are already common notes that shared across all the chords. 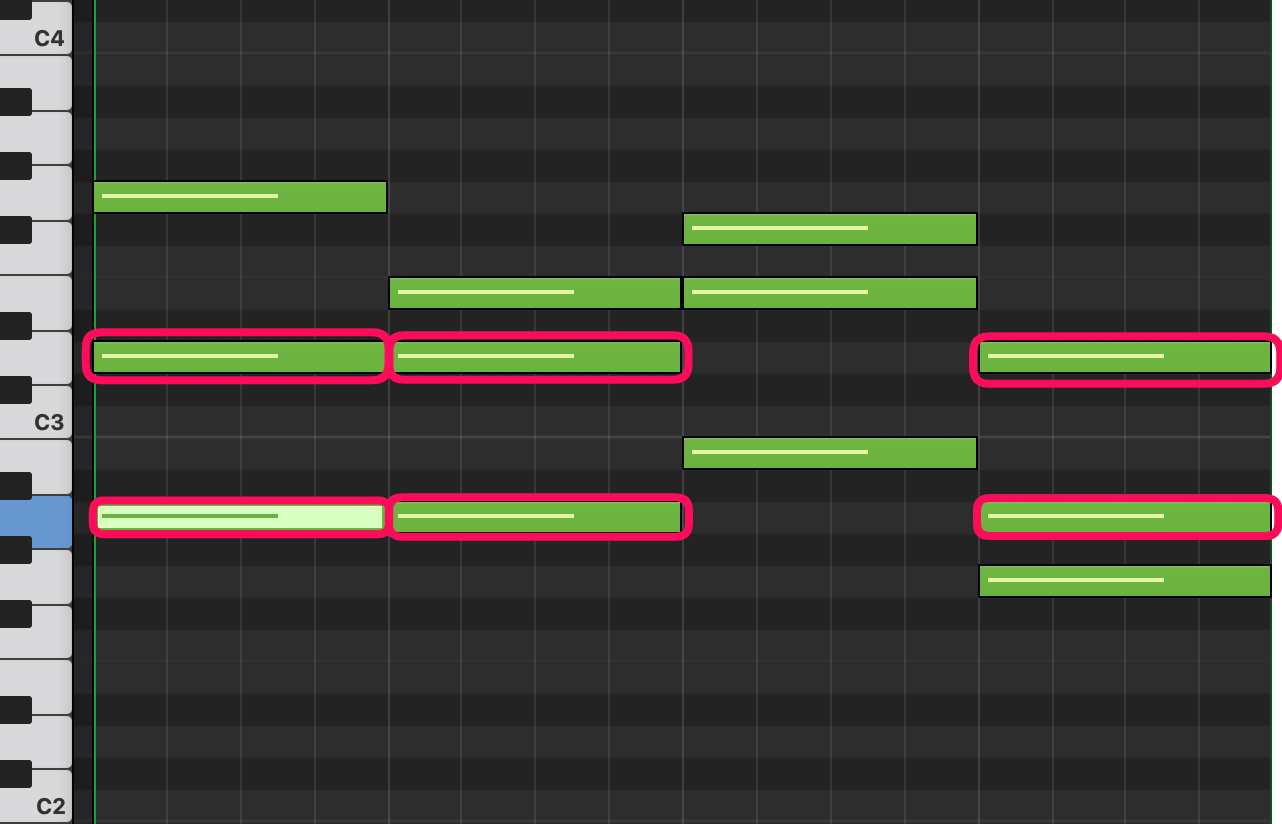 We could introduce a completely new note, and have it run through all of the chords, or we could just extend one of these notes all the way through.

Here's what our chords look and sound like now. You can really feel that tension start to build as a result of that sustained note, transporting you into a dystopian future!

Okay, not completely random. I mean other notes in the key.

Once you have your chords sounding good, try experimenting by adding more notes in your scale to your chords to see if they add anything pleasing.

If not, then just keep things simple.

For our example, I'm going to go ahead and add some notes (highlighted in the image below). Take a listen, and I think you'll agree we are rockin' that Synthwave vibe! Add Notes An Octave Down That Follow Your Original Chord Progression.

You may want to have your bass instrument take over this pattern, or you can add this to your chord progression.

But take a listen below after I add back in our original root note chord progression, one octave lower. The chords now feel very rich, lush, and dreamy. In summary, the 3 main things you want to do to get that synthwave sound are:

If you want to finish more radio-ready songs, and complete them faster without having to spend months or even weeks on end working on the same songs over and over, not even knowing if you're making them any better...

Then grab my free Rapid Song-Finishing Checklist below.

I hope you got value from this post on, How to make dreamy synthwave chords, fast!

What other questions do you have about making synthwave music?